TL:DR: we took an epic hike and lived to tell the (very long) tale.

Where We Decide to Take a Little Hike

The Amalfi coast is known for its hiking. Usually, people trek to the Path of the Gods, reputed to have an excellent view. However, we are marginally lazy, and I am very motion sick, so busing for an hour along craggy cliffs to get to the 4-hour hike did not seem like a wise idea. (The photos at the link look pretty amazing though, right?) Instead, we decided to do a short hike from our town (Maiori) to a nearby town purported to have good views (Ravello).

I did some research the night before, looking for a map of the hiking route or any indication of how to best reach Ravello. Though the town is fairly well-known, most people seem to reach it by bus – likely because it’s on a mountain. We didn’t want to walk along the road that the buses careen down, so I was looking for a hiking path. After an hour of frustrated zooming and elevation interpretation, I gave up. We would just take a path, and see where it got us.

Where We Do Some Trespassing

The next morning, I put on yoga pants and a hoodie, and B put on his convertible pants and jacket, and we set off with a bottle of water. We walked up on the Via Vecchia pictured above, since we knew that down led to the town, and to the bus road. Right away, we discovered a mini-mart, where I bought snow man-shaped mini chocolates: apparently, Italy also follows the ‘Christmas items right after Halloween’ rule. As we continued walking up the road, we saw lemon terraces, cars and motorbikes trundling along, and plenty of apartments built into the sloping town. Once the road became more dirt than asphalt, we wandered onto a side street that seemed to go upwards and that almost resembled a hiking trail.

A man on a motorcycle drove down it towards us. After passing us, he stopped his bike and yelled back at us in Italian. I responded that I was sorry, but I didn’t speak Italian. He repeated his initial shout, and I listened dutifully, but could make no sense of it. ‘I don’t understand,’ I said in Italian, and he realized he would need to try a different tack. ‘Privato,’ he said in the middle of his next sentence, and that I understood. So, I nudged B to head back down the side street, and the man drove off. Before we made it very far, there was the very nice man who gave me a lemon. And then we continued back up the bigger road.

Eventually, that road curved and became a dirt path, and we thought we must be on the right track. Another 10 or 15 minutes later, the road passed by a house, whose driveway a family was pulling into. This time, to be sure, I asked him if the continuation of this road was ‘privato,’ and he said no and waved us on. So, we trekked on. The path was fairly well-trodden and flat, and there wasn’t a lot to look at other than trees. Based on B’s phone GPS (which was working there!), we were almost to Pucara, the town directly north of our starting location. This was not interesting enough, nor was it Ravello, so we decided to branch off that large dirt path onto a smaller one that went up the mountain – at the top of which we imagined Ravello to be.

It was sunny and fairly warm, and the view kept improving as we climbed up. The path seemed to be narrowing a bit, but I had a snowman chocolate, so all was right with the world. As we approached the top of the mountain, we saw that Ravello was not right at the peak, but it must be just on the other side. It took us a few tries to figure out how to cross the top of the mountain, since there were several faint trails to choose from. Some of them headed toward a part of the apex that was taken up by thick clumps of trees, which were impenetrable. We turned back a bit and found a place to cross. Finally, we were at the top!

Where We Conclude That We’ve Been Looking for Atlantis

When we crossed to the other side of the mountain, we discovered that there was no path. It just ended. I mean, as it was, we were following one that was barely there, but now, there was absolutely no evidence that someone had gone before us. Now, a smarter group of people would have taken that as a sign that this area of ‘leaves no step had trodden black’ should be abandoned in favor of a drink back at the house. We are not that group of people. Instead, we saw it as a challenge, convinced that if we just got through this part, the path would pick back up, and we would reach Ravello in no time. After all, B’s GPS showed that we were proceeding in the correct direction. So, we traipsed forward, making our way through the brush, looking for hints of human activity and ignoring hints of animal activity. (“Do they have ticks in Italy?” I asked B. “Nope,” he said, though I knew full well that he had no idea.)

Now, this side of the mountain also had a slightly different set of fauna. Because that face received less sun, it was home to more thorny plants. My yoga pants were not holding up well to these rose-like vines. B had picked up a walking stick, so he used it to beat through the thorny obstructions. (For the record, I only made one ‘Walk softly, and carry a big stick’ joke.) I, on the other hand, was still carrying my lemon, so I used it to hold thorny branches away from my face. Bonus: every time the thorns scratched the surface of the lemon, there was a lemony scent all around me. Yes, it did look as ridiculous as it sounds: me using a football-sized citrus fruit as my weapon of choice against an army of prickly plants. I was not emerging the victor in our skirmishes. I had scratches all over my hands and legs, and enough sticks and leaves in my hair to make several potpourri baskets.

About an hour later, and only about twenty-five feet down the mountain, we started to realize that sunset was quickly approaching. Our energy was starting to wane, our water was more than half gone, our head lamps were at the house, we didn’t know if Ravello was anywhere near the bottom of the mountain, and we had been stupid enough to tell absolutely no one where we were. 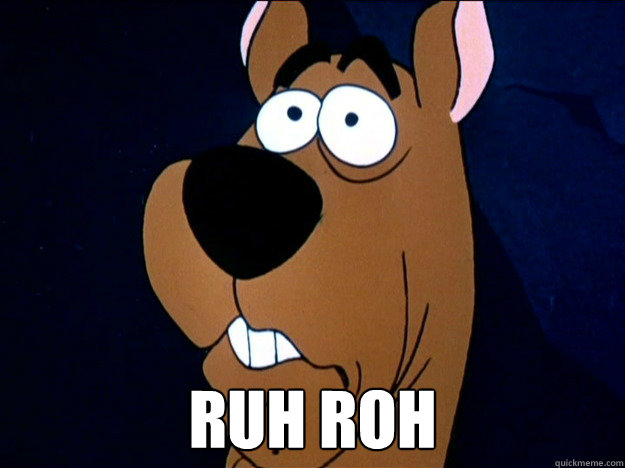 Where Scooby Doo Would Have Said, ‘Ruh Roh!’

B decided that we should go back up the mountain, because as soon as we made it over the top, we could get back on the little path to home. At least, when it got dark, we would be following an actual route, of certain destination. I was more hesitant, not least because he suggested it while I was trying to crawl through a particularly heinous and painful batch of thorny bushes. The other issue was that, to get to where we now were, we had leveraged the force of gravity: I had scooted down on my butt and extended my small arm- and leg-span with some mild acrobatics (and some not-so-mild swearing). I would not be able to pull myself back up those same places.

However, that is exactly what I did, because B’s wisdom won out here. He used his stick to try to clear a path, and I used my scrambling experience to essentially pull myself back up the mountain. We had to keep moving continuously, because this kind of climbing and bushwhacking was not going to work in the dark: we had to be on the other side by the time dark hit. And just as the sunset was complete, we reached the peak.

Except, if you’ll recall, the peak was long, with some areas that could be crossed and others that could not be. How were we going to find the place where we had crossed over, so we could get back on the path? We weren’t. We crossed where we could, in a much denser section than we had been in before. No path was discernible. The moon was out, but it didn’t penetrate through the trees we were in. We kept going, stepping on blankets of pine needles which sometimes gave way under my weight; I barely caught myself several times. My biggest fear was twisting my ankle. B was demolishing the brush with his stick, but trees were still everywhere. He was sweating and attracting all of the dew trying to settle on the ground. We were both covered in branches, bark, and miscellaneous forest souvenirs. We were frustrated in the thicket at the top of an unknown mountain in the countryside of Italy in the complete dark – with a few sips of water and some Christmas chocolates.

Where You Wonder How This Story Could Keep Going

After a series of turns and U-turns and double backs, B somehow managed to find a path. It was narrow and made of rocks and not anywhere near our original path, but it was a sign of civilization! We wouldn’t have to camp on the mountain! We followed that path to larger and larger paths, until finally emerging back on the asphalt road that led to our apartment. Yay, trial-and-error, B’s persistence and sense of direction, and luck!

On the road back was a little shop, and we stopped to grab beverages. (Non-alcoholic, unfortunately.) The other clientele in this establishment looked quite aghast at our appearance, since we looked like we had been in a fight with an aggressive tree. After our five(?) hour ‘hike,’ we couldn’t summon the wherewithal to care. We finally arrived home, relieved and unbelievably happy for things like showers and tomatoes.

And then the next day, we did it again. Just kidding. What are we, crazy? (Don’t answer that.)

3 thoughts on “That Time We Tried To Go To Ravello”